Where to Camp on Culebra, Puerto Rico Part II 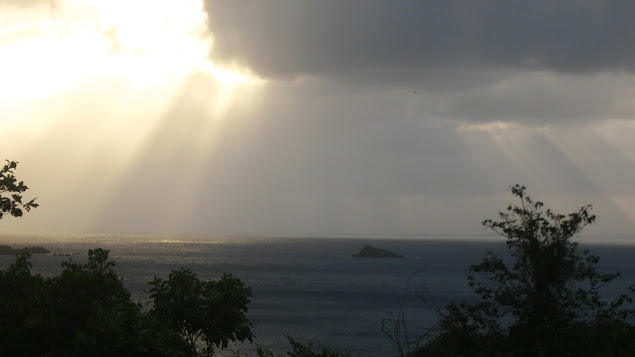 This is the second part of our camping guide to Culebra Island.
Camping at Flamenco Beach on Culebra Island in Puerto Rico is an excellent choice for a person or family that is on a budget, seeking something different than merely staying in a hotel, or who wants to experience living in a somewhat primitive and very natural environment for a while.  Many visitors opt to camp in Culebra to get off the beaten path or to experience spending time on an island where accommodations are often otherwise expensive.  Many are brought to Flamenco beach's campground due to the beauty of the natural environment and the allure of spending a few nights on one of the most beautiful beaches in the world.  No matter what your reasons are for considering camping at Flamenco beach, you are bound to experience a memorable trip that you will cherish for a very long time.

Many people who camp at Flamenco beach find it hard to leave.  Many individuals dream of returning again, even though 'roughing it' has its challenges.  However, with all the amenities that are available at one's disposal, camping at Flamenco is not as much roughing it as it is a pleasure. 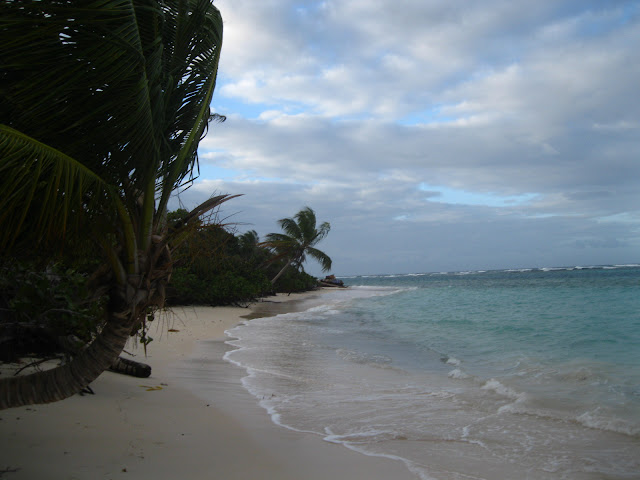 Imagine, camping a few meters from the ocean, falling asleep and waking to the sounds of the surf hitting the shore.  In the morning, being surrounded by deer making their way through camp, or by the tropical breezes that blow in between the palm trees that line the coastline.  Imagine crossing the island via foot to the lesser visited beaches of Carlos Rosario or Playa Tamarindo.  Taking a plunge into the nearby reef to see some of the tropical fish and return in time to hunt for coconuts.  Afterwards, you can make your way into Dewey for dinner, or enjoy an evening meal by candlelight right on the beach.  Infinite opportunities await you.

The purpose of this site is to explain to you exactly how to navigate the island of Culebra and get the most out of your camping experience on Flamenco Beach.  Many travelers want to maximize their time on the island, while minimizing the costs involved.  This website will show you how to get to and around the island, purchase food and supplies, and once there not miss a thing.  Many people find that they missed something, or missed out on camping entirely because they did not know how to go about doing it.  Getting to Culebra and Flamenco beach from San Juan, even without a rental car, is easy and should not have to cost a lot. 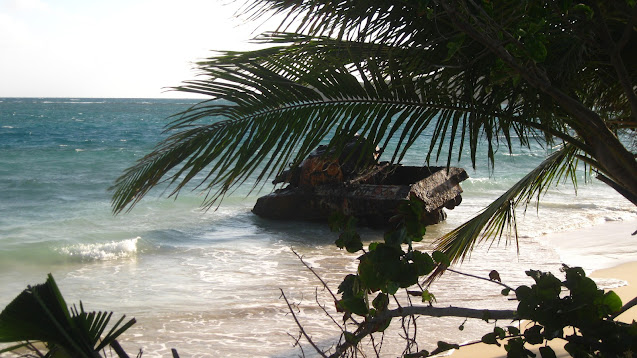 Culebra has changed over time but still holds its unique charm.  When you arrive you will find a laid back group of people who love their island home.  You will quickly understand why.  Life is a lot slower here, but that does not mean it is not exciting.  On the contrary, there is magic to be found all over the island.  From its amazing beaches to its hillside vistas.  Even under the sea the world comes to life.  This is how it is on the island of Culebra.  We hope that you enjoy it and get as much out of it as you possibly can.

Culebra is a popular weekend tourist destination for many, including mainland Puerto Ricans, Americans as well as residents of Vieques. Because of the "arid" nature of Culebra there is no run-off from rivers or streams. This results in very clear waters around the beautiful archipelago.

Culebra has many beautiful beaches including the famous Flamenco Beach (Playa Flamenco). Flamenco can be reached by shuttle buses from the ferry dock. Playa Flamenco extends for a mile with white coral sand which is framed beautifully by the arid tree-covered hills. Playa Flamenco is also protected by the Department of Natural and Environmental Resources as a Marine Wildlife Reserve.

The area that is west of Flamenco Beach as well as the adjacent Flamenco Point were used for joint-United States Navy/Marine Corps military exercises until 1975. Many military relics, which include a couple of tanks, still remain. Culebra and Vieques offered the U.S. military an experience of great value to the battles in the Pacific as a feasible training area for the Fleet Marine Force in amphibious exercises for beach landings and naval gunfire support testing. Culebra and Vieques were the two components of the Atlantic Fleet Weapons Range Inner Range. In recent years, only the shortened term "Inner Range" was used.

Some of the other beaches in the area are only accessible by private car or boats. Of the smaller islands, only Culebrita and Luis Peña permit visitors and can be accessible via water taxis from Culebra. Hiking as well as nature photography are encouraged on these small islands. However, activities which would disturb the nature reserves on these islands are prohibited. These include camping, littering and use of motor vehicles. Camping, however, is allowed on Playa Flamenco throughout the year. Culebra is also a popular destination for scuba divers because of the many reefs throughout the archipelago and the crystal clear waters.

WHERE TO RENT CAMPING SUPPLIES ON CULEBRA, PUERTO RICO?
Many people would rather rent a tent while camping on Flamenco beach than bringing one with them.  This is understandable, as campers who are just spending a few days on the island may not want to carry a bunch of heavy gear with them.  If you are only spending a few nights on the island and have other plans while visiting Puerto Rico, you may want to consider renting a tent or buying a cheap hammock.

One place to rent a tent is at Tent City.  It is located at one of the kiosks right on Flamenco Beach.  Tent City rents tents as well as other camping gear.  Examples include mattresses, propane stoves and flashlights.  Tent City also sells hammocks, both premade and some that they make on site.  The most recent rates for a tent rental from Tent City is $20 a night, although this rate is subject to change.  Tent City also charges a deposit (around $50) for a tent.

Tent City can be reached at 787-226-0232.  Their hours are often quite sporadic and are generally closed in the evenings.  It is best to get to Flamenco Beach in the morning.  If this is not possible, have a back up plan if you want to rent a tent.  One thing that many people like to do is take a hammock with them and spend the first night in a hammock.  The weather is pleasant enough year round to do this.  Make sure to bring a small fold up tarp with you if you sleep outside, as it often does rain in this area of the world, and the rain really does pour.

Staying in a hammock is a very enjoyable experience and allows you to look up at the stars and wake up to the jungle and beach surroundings.  There are enough trees that are close together to easily find a place to hang a hammock.
IS IT SAFE TO CAMP IN PUERTO RICO?
One question that comes up regarding camping on both Vieques and Culebra is safety.  There are many people who camp on Isla Culebra and Vieques every year, and very few people have any problems.  In fact, the camp facilities on both islands are well watched over, both with offices and staff that ensure the safety of their guests.

On Vieques, groundspeople and guards watch the camp area constantly.  There is an overnight guard that patrols the area outside of the camp during the night.  During the day the camp area is busy with both day and overnight guests.  Equipment is often left out while people go to one of the nearby towns, on a tour, or swim at one of Vieque's beautiful beaches.

While one can never guarantee that nothing will go wrong, the truth is, camping on either Vieques or Culebra is an excellent choice.  Both campgrounds are family friendly.  They are well watched over and are, overall, very safe.  Enjoy your stay!
BUDGETING FOR YOUR TRIP TO PUERTO RICO

Many people enjoy camping on Culebra because it is, overall, an inexpensive way to visit the Caribbean.  However, one must keep in mind that staying at the Flamenco Beach Campground can add up, especially if one does most of their eating at the local kiosks or travels into town regularly via taxis.  Therefore, it is important that the visitor, especially the long-term camper, has a budget.

I have come in contact with my people who have been at Flamenco Beach camping for a month or more.  Some individuals have no plans on leaving.  Others have been island hopping from the Virgin Islands or the Domincan Republic, and are staying a while on Culebra for a change of pace.  In order to do this, you should have a rough idea of what things will cost you while on the island.

Keep in mind that the prices often change.  Camping is inexpensive and was $20 last time I visited.  A good hammock should cost no more than $20.  You can buy a cheap one at a few of the stands on the island.

Food prices vary on the island.  I have posted a few menus to give you an idea of what to expect.  However, if you are staying on the island for a long time, you will want to stock up on groceries and produce.  It is possible to walk into town instead of taking a taxi.  If you do this, you may want to walk into town early in the morning before it becomes hot.  You can then take a taxi back for $3 if you purchase a lot of things.

Items at the grocery store are not too expensive.  They are a little higher than the mainland due to the cost of shipping goods over, but are still comparable to princes in many areas of the continental United States.

Of course one must keep in mind the cost of getting from San Jose to Fajardo (and eventually back), which can vary greatly depending on how you go about doing it.  If you are taking a taxi, it will probably be around $60 for a taxi.  If you are staying at a hostel or hotel in San Juan before heading out to Culebra, consider asking around.  Many people often find traveling companions to share a van with.  Sometimes the charge for a ten person van is around $120, but if you can arrange enough people you may end up paying around $15-20 a person.  If you are taking a publico, prices will vary depending on how full the publicos are.  It is possible to get to Fajardo from San Juan for $5-10, even though some drivers will try to charge you as much as $15 a person.

A few examples of menus from around town have been posted below. 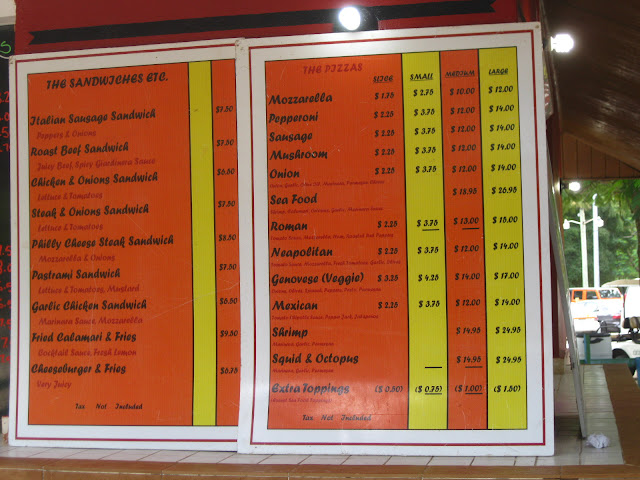 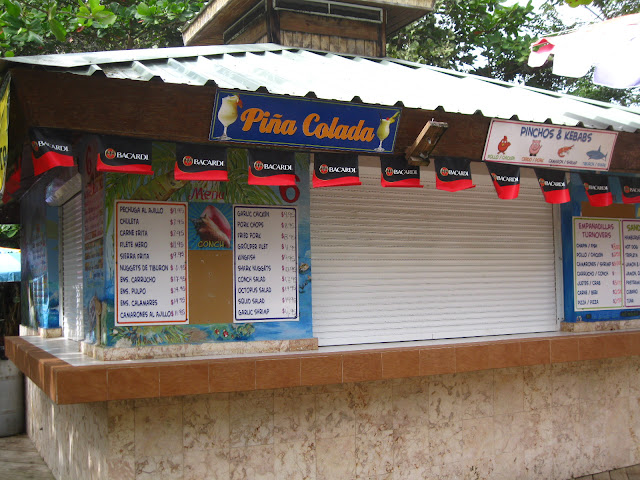