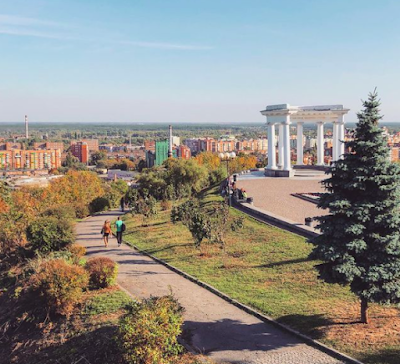 At the end of the summer, my wife, daughter, and I decided to take a short trip to Poltava, Ukraine. We wanted to go somewhere that was not too far away yet that we had not yet visited. We took the tram to the bus station from our house in Dnipro. On the way, our daughter, Sephie, realized that she forgot her cat head pillow and was pretty upset about it, so I jumped off of the tram and ran back home. This caused our trip to be a bit delayed, but not by much.

The bus station in Dnipro is a close walk from the train station. There are many great places to travel to from Dnipro. Some places we had visited in the past were Zaporizhia and Berdyansk.  This time we were off to Poltava after quickly purchasing a ticket and being told that the bus would leave in five minutes.
The bus station in Dnipro is super convenient and easy to navigate.  On the second floor is the ticket counter, and upstairs are all the buses and marshrutki (smaller minibusses).  The ride to Poltava was a pleasant one, passing through farmland and picturesque small villages.  The ride there was quite comfortable, and there were not too many people on the bus.  After a couple of stops to stretch our legs and purchase food, we arrived in Poltava.  The ride was probably between two to three hours long.
FIRST IMPRESSIONS OF POLTAVA
When we arrived at the Poltava bus station, I realized that we were not anywhere near the center of the city.  Luckily, there are a few ride-sharing services such as Uber in the area and it was easy and cheap to get to our rented flat from the bus station.  The ride took about 10 minutes.
Our Booking was a cute little loft near the Poltava market.  I really liked our apartment and its location. I recommend using Airbnb or Booking to find a cheap but comfortable room in this small city.  After getting comfortable in our new place, we decided to walk around the city a bit.

Poltava isn't so different than many other Ukrainian cities, but it has a lot of charm that makes it worth a visit.  Being that we were from the United States, we were somewhat of an oddity in this town that is a bit off the beaten tourist path (this is something that we are very used to).  There are some tours that go from Kyiv to Poltava, but I doubt they visit the area where we stayed. 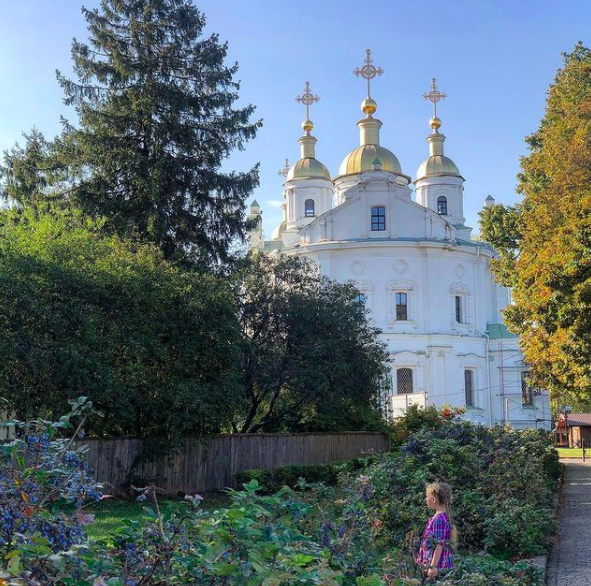 WHAT TO DO IN POLTAVA

As we meandered around the town, we saw many people selling goods outside of the main central market.  Beverly purchased some hand-knit socks Sephie and herself for less than $2 each.  The market is a very busy place, and there are many people shopping for meat, vegetables, bread, and other goods at this indoor and outdoor market that is located not so far from the center.  After passing through this part of the city, we continued towards Corpus Park, which is located in the center.
Corpus Park is surrounded by Sobornosti street, and you could say it's kind of like a giant roundabout.  In the center is a restaurant, statues, and a lot of greenery that makes it a lovely park to walk through.  Along the outside are big white buildings with columns.  Many of these look to be government buildings and have beautiful architecture.  There are many large trees which provide some respite from the heat on hot summer days.  Being that we visited in October, the weather was great for strolling around the city.  Seeing the leaves change color only added to the charm.

One of my students in Dnipro told me that Poltava was built on the same model as Saint Petersburg.  I have never been to Saint Petersburg, but I found that interesting.
The most popular sites to see in Poltava are the historic churches.  The Assumption Cathedral, near the Rotunda of Friendship, is a beautiful Orthodox style building.  To get there, you follow Sobornosti street.  Near the Rotunda of Friendship is a whimsical monument to dumplings.  Poltava is famous for dumplings, and the place to find them is along the cobblestone pedestrian-only part of Sobornosti street that connects Corpus Park to Sonyachnyy Park. 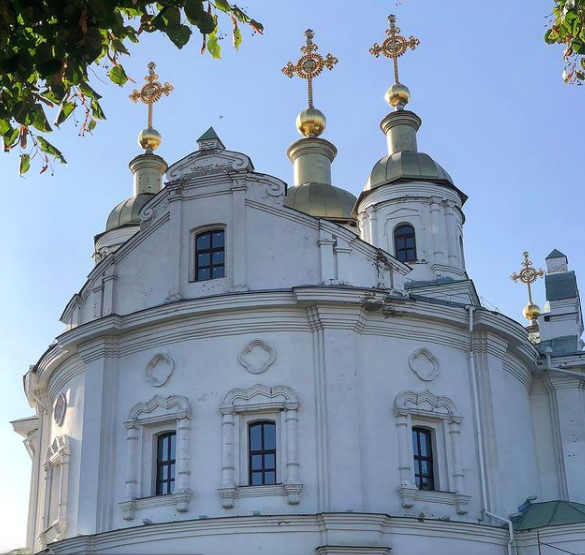 Poltava's famous dumplings are some of the best.  There is even a vegetarian version!  I was able to try some at Hulushka and they were delicious.  They resemble a more bread-like cake of dough.  The dumplings I ordered came in a savory yellow garlicy sauce.  They are a must-try when in Poltava, and can be made easily at home.  There is also a Lviv Handmade Chocolate restaurant near the center of the city as well, which is always a nice place to stop for a delicious drink and some high-quality chocolate goods.  There are many eateries scattered throughout the city as well.
There are some other parts of Poltava such as Dendropark which has another large Orthodox church that we were not able to visit.  This was due to us all feeling pretty lousy on our last day and not going out except for some food.  I would have liked to visit, but I realized that this gives us a good excuse to go back.  I would definitely revisit this small Ukrainian city again.  It's a wonderful place to just walk around, interesting architecture and eat good food.  The historical parts of the city make for a great backdrop for many photographs. 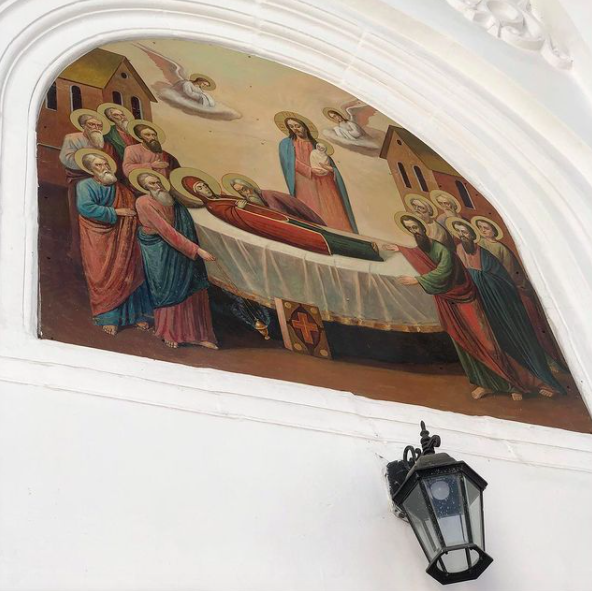 LEAVING POLTAVA
I would have liked to have stayed a little longer in this picturesque city, but hope to go back one day.  The bus ride back to Dnipro took a little longer than the ride to Poltava (about three hours), and it was far busier (it was also a full-size bus instead of a marshrutka).  It really depends on the "luck of the draw" as far as what type of transportation you will end up with when taking a bus (I also noticed this when going to and from Berdiansk).  Overall, the trip was comfortable and worth it.  I would say three to four days is a good amount of time to enjoy Poltava.
at December 07, 2020

Email ThisBlogThis!Share to TwitterShare to FacebookShare to Pinterest
Labels: Ukraine