Why Odessa Is Ukraine's Coolest City


It's fair to say that I have seen much of Ukraine in the past few years. I have not only lived in Kyiv and Dnipro but have also visited Lviv, Uzhgorod, Mukachevo, Uman, Berdyansk, Chernihiv, Poltava and many others over my time in this vast country. But, when people ask me what my favorite city in Ukraine is, I tell them it's Odessa (or Odesa, as it's often spelled).

Odessa is one of the most visited cities in Ukraine, and it's well-deserving of its reputation as one of the overall best cities in the country for tourists. It's a place where centuries-old buildings stand against the backdrop of the Black Sea's sand-laden beaches. It's where one of Europe's most beautiful (and underrated) opera houses greets visitors from all over the world. Odessa is a place where there are countless parks, restaurants, and markets.
Some people may ask me why Odessa is more deserving of the "coolest city" title, rather than Lviv or Kyiv.  After all, Kyiv is Ukraine's capital city and Lviv is perhaps Ukraine's most-visited city.  First, Odessa's charm is partly in the fact that it is not Ukraine's most visited city, and for most travelers, it's kind of off the beaten path.  Sure, a lot of people visit Odessa, but coming from the United States, I don't personally know anyone who has ventured to this seaside city of slightly over a million people.  In fact, as an American who spent about a month in Odessa when I took the CELTA (a certificate program for English language teachers), I only heard English spoken in the city a couple of times.  As an American, I was somewhat of an oddity here.

Here are some of the reasons that I think Odessa is Ukraine's coolest city:
It's A Place Where Old Meets New 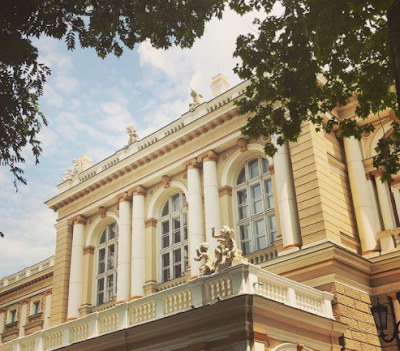 If you like architecture as much as I do, you are going to love the contrast in the different buildings around the city.  Unlike many cities that have destroyed their old buildings to pave the way for more modern ones, Odessa's old buildings and their lovely facades still stand.  As you walk through this lovely city, you will find some kind of interesting building.  While the outskirts still have the Soviet-style flats that many other Eastern European cities are known for, the center of Odessa is like a whole other world.  As you meander along Odessa's tree-lined streets, you will come in contact with architectural touches like statues, columns, and beautifully designed doorways and balconies that provide excellent photo opportunities.
The Center Is Very Walkable
If you like to walk, Oddessa's compact center is a great place to stretch your legs.  While compact, it's not too compact, and you can feel free to get lost in the surrounding neighborhoods.  The center is home to Odessa's famous opera house, which is one of the most beautiful buildings in Ukraine.  Close by are many parks, vistas of the Black Sea, and various parks and gardens.  If you happen to come during the summer months, you should treat yourself to some Ukrainian ice cream.  For some reason, ice cream in Ukraine is some of the best that I have ever had.
Beautiful Black Sea Beaches 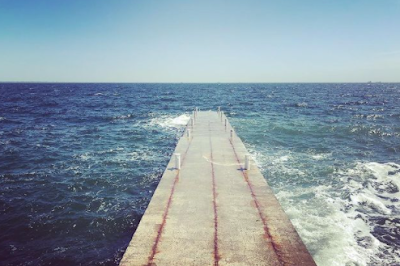 The Black Sea is Odessa's claim to fame, and the beaches here are quite superb.  While they get busy during the tourist months, you can enjoy lesser-crowded beaches before May.  While they are not ideal for a swim outside of the Summer window, the sea makes for a lovely backdrop for a long walk along the pathway that meanders alongside the sea.  During the Summer months, Odessa's beaches are a happening place, with hordes of tourists vying for pretty much all of the available sandy real estate.  Along the beach, there are many not-so-expensive restaurants serving everything from traditional Ukrainian food to Italian cuisine and pizza.  There are even some Georgian restaurants selling tantalizing if not cholestoral-rich Khatachpuri.
The Door to the Sea and the Gondola Ride
There are two interesting sights to visit along the beach.  The Door to the Sea is a lovely place to visit no matter the time of year.  It's also an Instagram-worthy photo opportunity that is bound to get you some likes.  Established in 2017, the "Door to the Sea" is located near the Nemo Dolphinarium.  Get there when the sun rises and you can try to capture a photo of the sun's rays coming through the door.

Keep following the sidewalk along the beach and you will notice another interesting feature of this city.  It's the gondola ride that takes to/you from the beach from/to a neighborhood not too far from the center of the city.  This is not the kind of ride for those who are afraid of heights, and I must admit that when I rode this attraction, I felt a bit uneasy.  It's a ride that shows its age, but as far as I know, no accidents have occurred.  One thing that I especially liked about this ride was the garden below as you reach the neighborhood on the opposite side of the beach.  You may even witness a person tending their garden below as the gondola makes its descent.
Ukraine's "International" Port
Odessa is the doorway to ports in Romania, Turkey, and Georgia, to name a few.  In fact, you can catch a ferry to these countries if you wish.  In fact, I did that not just once, but twice.  The ferry from Odessa to Batumi (or back), departing from Chornomorsk, is a unique and very comfortable way to travel.  Aside from the ferry, Odessa has more of an international flavor than many of Ukraine's other cities.  Here you will find some Asian restaurants, as well as many restaurants featuring Georgian cuisine (which has grown more popular in Ukraine over the years).  At Odessa's central market, which is a very large market near the train station, you will find food from many of these nearby countries for sale, as well as local produce from Ukraine.
Odessa Has Some Amazing Green Spaces 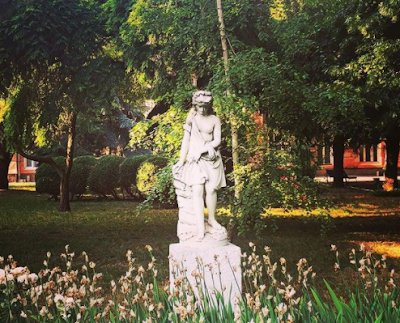 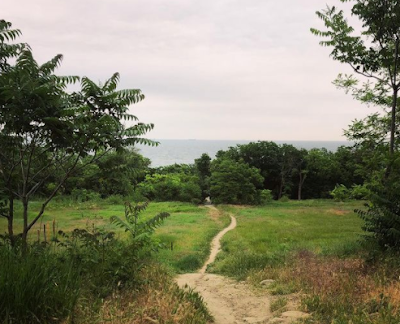 It's not hard to find a green space if you are in Odessa.  Taras Shevchenko Central Park is one of the biggest.  This park is home to Luna Park, an amusement park that has something for people of all ages.  There is even a huge Ferris wheel that provides some amazing views of the city.  From the central park, you can continue along the entire perimeter of the sea beach on a tree-lined bike and pedestrian pathway.  Beyond these parks, there are many other city parks and gardens with splendid fountains and sea vistas.  Another lovely park is located near the opera house and continues along a tree-lined promenade that winds through Odessa's historical residential area.  Follow this park towards three of Odessa's art museums.  If you get tired, there are plenty of benches to enjoy a rest while enjoying the scene of the local life in this laid back city.
How To Get There 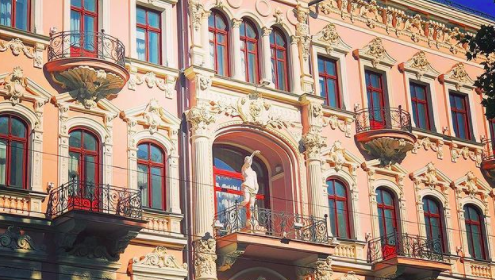 Odesa is easily reached via overnight train from Kyiv, Lviv, and almost every other major city in Ukraine.  One may also fly into Odessa or, if more adventurous, take the ferry from Istanbul or Batumi (my favorite).  Of course, you can also take a car or bus to this city on the Black Sea.
Have you been to Odessa?  If so, share your thoughts in the comment box and let me know what you thought of this city.