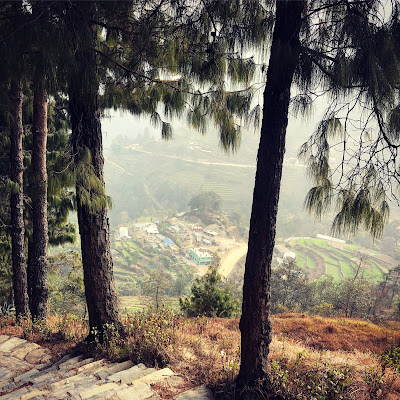 It was a cold, dusty, and quite an uncomfortable February day when we left the awe-inspiring historic city of Bhaktapur for the hill town of Nagarkot.  Visiting Bhaktapur was a ton of fun (more about this in another post), but for some reason, the hotel we stayed at didn't have any hot water, so feeling clean wasn't happening for us.  The hazy air in Kathmandu made seeing the Himilayas impossible, and we thought that maybe going into the hills at Nagarkot would give us a glimpse of Everest and the other majestic mountains in the distance.

As we climbed higher and higher, with our small bus turning around hairpin curves and making its way closer to the small hilltop village of Nagarkot, I just knew that we were not going to see much other than a big cloud of dust when we got to the summit.  Oh well, I thought.  We are here [in Nepal] for a few more weeks.  Surely, we will get to see the mountains before we leave. 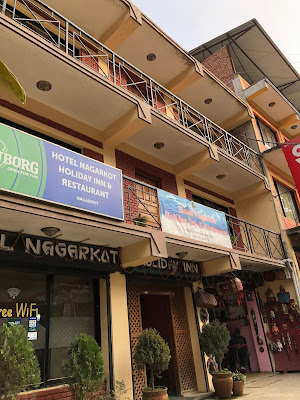 Our bus turned into the small "station" in Nagarkot.  I say station, but it was more of a bus stop with a small food stall next to it.  We disembarked from the bus and opened our map apps.  "It looks like the hotel is about half a kilometer down the road," I said to my wife, Beverly.  Sephie (our daughter) was looking around, scouting for interesting stores that may sell toys.  "Let's get going," my wife said.  "We can check into our hotel and get some lunch."  Lunch sounded nice.

We made our way along the winding road through what was a very small mountain village.  The buildings were about three to four floors high.  Many of them hung off the cliffsides, promising epic views of the valley and mountains in the distance.  As we walked I peeked between them, only to see the haze in the distance.  "I looked at the weather forecast and it doesn't look like it's going to clear up," I told Beverly.   "But, this should be an interesting place to hike and get to spend time in nature."  She agreed.  It was nice to be somewhere new.

We finally made our way to our hotel.  It was called the Hotel Nagarkot Holiday Inn.  I don't think it was affiliated with the more-famous "Holiday Inn" chain.  Yet, it was not bad.  Just kind of cold.  Having come from India a couple weeks back, we were not acclimated to the cold yet.  "I really hope we have some hot water," I told Beverly.  I don't like cold showers at all. 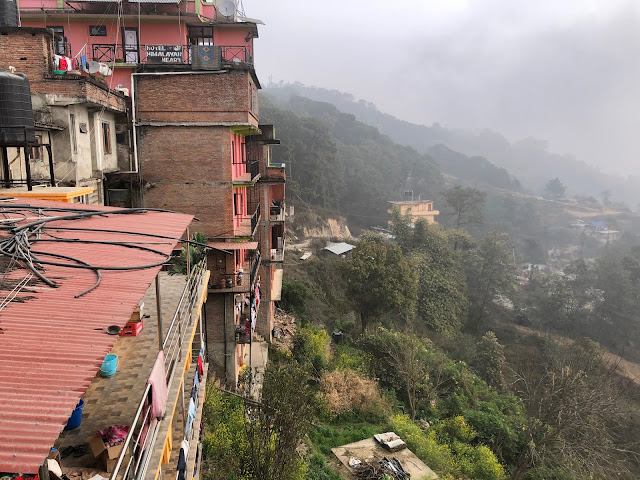 It didn't seem like we would.  If anything, this hotel was a little less "fancy" than the one we had in Bhaktapur, which was a part of the Oyo hotel chain -- a well-known hotel group based in India.  And that hotel's water didn't even get warm at all!  Both hotels had reviews that mentioned hot water, and I was hoping and praying that this one would at least have something comfortable.

We checked into our room.  It was a pretty nice room.  It had a patio with an awesome view of the valley and the clouds beyond.  Yet, there were no mountains to be seen.  Not even a hint or outline of any.  A shame.  "Here's a heater and some extra blankets," our host said, smiling.  I turned on the heater and enjoyed the blast of warm air.  "This is nice," I said, not wanting to leave for a while.  My wife went to the bathroom and checked the water.  "It's warm!" she said.

I grinned.  "That's great!"  Even our apartment in Kathmandu didn't have that warm of water.

We made our way down below for a Nepalese lunch.  It was the usual:  Momos and fried rice.  It was satisfying, though.  Then we headed out, wondering what we would find.

WHY NAGARKOT IS WORTH VISITING, EVEN DURING THE LOW SEASON.

I think that we maybe saw maybe four or five other tourists in our two days of staying in Nagarkot.  There's no doubt about it--we visited during the lowest of the low season.  Most of the hotels were empty.  There was nobody in many of the restaurants.  The hiking trails were virtually empty (we only passed by two other couples).  We walked miles (or should I say kilometers) around the village and were greeted by local children, villagers, and smiling people wanting to sell us locally handcrafted goods.  We purchased a couple of inexpensive knitted colorful Nepalese winter hats and went into the hills. 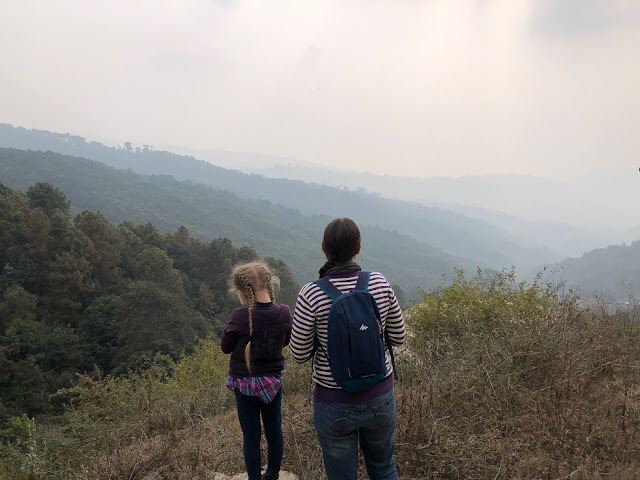 Part of the charm of visiting places like this during the low season is seeing how the locals live.  Sure, the mountains were not out to be enjoyed, but getting to hike on empty trails gives a place a whole different kind of atmosphere.  Many of the hotels in this area depend on tourism to operate, and it was nice to support these people during the low season.  Restaurants are still open and you can have the entire place to yourself, which creates a nice quiet and homey atmosphere in some of the local eateries.

We particularly enjoyed the Nagarkot Panoramic Hiking Trail, which goes deep into a valley before climbing back up to another road that follows the cliffs and hillsides around to a couple of other small villages.  The whole hike took a day, and at the end of it, we were all pretty exhausted (especially our six-year-old daughter). 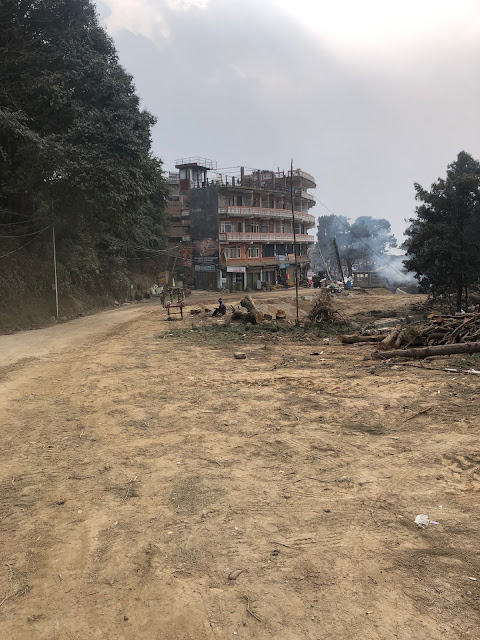 There are many idyllic hotels in Nagarkot, and most have rooms that overlook the valley and mountains.  Below you can watch local farmers and livestock at work.  Along the road, there was quite a bit of construction and large bonfires burning trees.  This adds to the hazy air, which was probably my least favorite aspect of Nepal.  Mixed with the cold, it can be quite uncomfortable, and I was not prepared for it.  I recommend getting a mask.

The best thing about Nagarkot is just enjoying local life.  Hiking along the roads provides a ton of photo opportunities.  You'll see lots of homes, schools, some restaurants and shops, and a lot of amazing views as you make your way along the main road.  There are a ton of little trails that you can explore, which makes Nagarkot really interesting.  You could spend a ton of time here and not see it all.  If you are adventurous, you could actually walk back down to Bhaktapur via the trails.  We would have likely tried this, but with a six-year-old it would have been a bit much.  Maybe when she's older.

GETTING TO NAGARKOT FROM KATHMANDU

It's super simple to get to Nagarkot.  All you have to do is head to the Bhaktapur Bus Terminal in Kathmandu.  It is located east of Ratna Park.  You will take two buses in total.  First, you take a bus to the city of Bhaktapur, which is beyond a doubt worth a visit.  It was a huge highlight of my trip to Nepal.  The bus to Nagarkot is close by.  The bus takes about an hour and a half, even though the city is only about 10 kilometers away.  The bus gets pretty crowded.  On the way back it was super crowded.  It's comically slow and somewhat uncomfortable.  The ride is interesting though.  The views are great, but it's very windy.

There are a lot of hotels, and if you visit during the low season, you won't need a reservation. 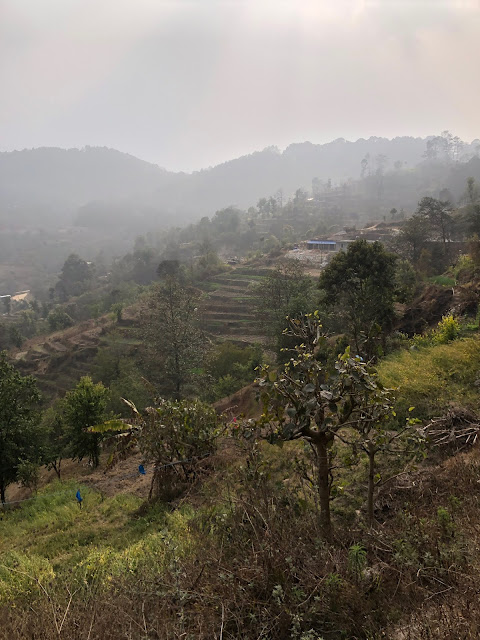 Email ThisBlogThis!Share to TwitterShare to FacebookShare to Pinterest
Labels: Nepal