Why Varkala, India is The Place to Travel To in 2021: Paradise on the Cliffs of Kerala 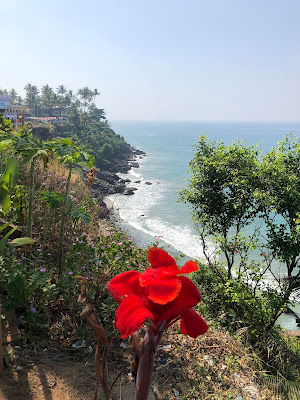 Upon the cliffs, overlooking the beautiful blue Indian Ocean lies the resort of Varkala.  Believe it or not, this is not Goa.  This is one of Kerala's most hip beach destinations.  It is also a bit different than some of the other beach destinations in India, and you may be wondering why.  No, it's not the high price of food and the higher price of almost everything else.  No it's not the autorickshaw drivers and shopkeepers asking you to avail yourself to their services.  No, it's not the beautiful blue waters and cows walking the beach.  It's not the overpriced thalis and 100 rupee dosas.  Give up?  It's the way the town is situated upon the cliffside.  The fantastic views in Varkala are what sets this place apart from Goa and other more "sea-level" destinations.

The views in Varkala are quite amazing, and as you meander along the pathway right on the edge of the town, you are afforded the opportunity to gaze down at beautiful beaches full of people enjoying the warm Indian sun.  Sunset is an extra special time in Varkala to enjoy a meal at a restaurant with a view that will mesmerize and enchant you.  Welcome to Kerala's version of paradise.  It is a destination that is becoming more and more popular.

Varkala is a lot newer than some of the other destinations in India that you have likely heard of.  Goa and Kovalam are both well more established, with their own fanatics that have been coming in droves for decades.  You can see it in the infrastructure of these places.  But Varkala is newer, and you will notice that you make your way north from the cliffs and head to Odayam beach.  You will actually see the jungle and trees and undeveloped spaces.  You will see a brilliant looking mosque with minarets rising from the palm forests.  You will walk along yet-untouched beaches where you can swim out and look back at trees and forests of green.  These days will not always exist, sadly.  One day the green places will become buildings, restaurants and perhaps parking lots for taxis, but for now, the dirt roads that lead on and off the cliffs give Varkala a more natural feeling.

Immediately you will see that Varkala is noticeably more expensive than Kochi or Alleppey.  There is big tourist money to be made here, and you will quickly take note of that fact that as you walk along the main walkway.  On one side is a cliff, and many sections are without a protective barrier.  One wrong step at night (or day for that matter) and you will fall to your death.  Be careful!  This is for sure a "no selfie" zone!  On the other side, stands selling shawls, purses, trinkets, jewelry, and all sorts of tours will beckon for your attention (many of them are quite beautiful and exotic, too).  Like other resort places, if you want cheaper food and goods, you have to head away from the resorts and the direction to where the buses and trains are.  You will know it by how many locals you see, and how few of those locals are trying to sell you something.  If you see people working on something other than your pocketbook and fewer pale-skinned tourists, you know you are going in the right direction. 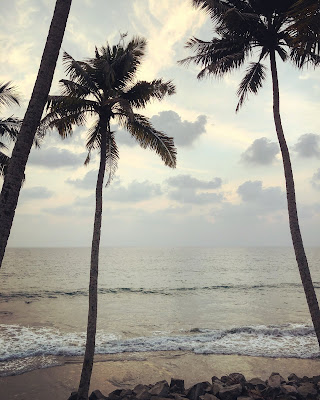 Many people want to compare Varkala to Kovalam, and for good reason.  They are both pretty close to each other.  Varkala is younger than Kovalam, and so is the crowd.  Both have very similar prices.  But, if you like nature, you should choose Varkala hands down.  If you like amenities, both are well suited for you, but Kovalam has the edge.  Getting to and from Varkala from the train station is cheaper, as well.  Both have their beauty, but it is Varkala that looks different than most beach resorts.  And both are great alternatives to the infamous beaches of Goa.

In Varkala we stayed at the Fish Village, which is an inexpensive jungle garden "resort" (I use that word loosely) located in Odayam behind the mosque.  The grounds of Fish Village are beautiful.  There are a few small houses in the jungle surrounded by palm trees and silence.  You can barely hear the ocean here.  Five times a day you are greeted by the call to prayer from the nearby mosque.  Laying on the hammock and enjoying the breeze is a great way to relax.  You are also steps away from two good and less-crowded beaches for swimming and playing in the water.

One of our rooms had a bit of an ant issue, and I recommend not storing food into any of your rooms in India, especially if it happens to be in the jungle.  If you don't like insects, this may not be the place for you, as being in the jungle always means dealing with some critters, especially the kind that you are probably not used to if you live in North America or Europe.

Being that we were at The Fish Village, we got acquainted with a nice little restaurant on the beach out front (it's the only restaurant out front).  I can't believe it, but I have forgotten the name.  How embarrassing!  However, you will notice there are some tables on the rocks that overlook the ocean with some candles at night.  It's a great place to watch the sunset.  The food is good, too, and a bit less expensive than some of the other places. 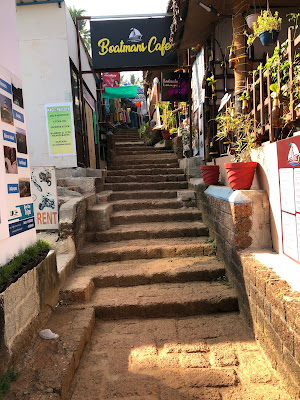 In conclusion, I would say that you should visit Varkala if the beaches of Alleppey and Kochi do not satisfy you.  If you want a less expensive beach experience, I would recommend going to Marari Beach for a day or two and staying in Alleppey.  This way you will not break the bank.  Personally, I do not go to India for the beaches.  They are gorgeous, but there's a lot more interesting things to see and do in India away from the beaches.  Indian beaches are beautiful though, but they are just one perk of this country, and they should not be missed.  But, don't spend all your time and money at India's beaches, because this is where you will sink the most of your cash while you are here.

Getting to Varkala takes about two to three hours from Alleppey via train or bus.  The ferry to Kollam is also a good way to get to Varkala from Alleppey, although you will have to take a bus, train and/or auto rickshaw from Kollam to Varkala once you arrive.  The ferry takes eight hours but it is worth it if you have time to spare.  If you are going onward to or coming from Kovalam, it's about two hours by train and autorickshaw.  Having been to both, I would recommend just choosing one place or the other and spending time visiting other parts of India.  This is especially true if you are pressed for time and are not on an unlimited budget.
at January 30, 2020