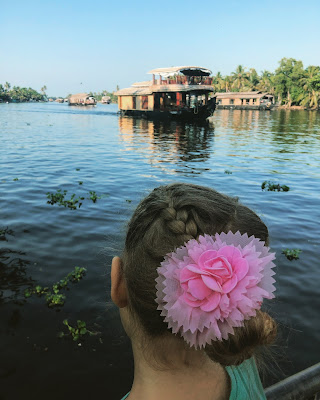 We have now been in India for more than two weeks.  We are in our fourth town - Kovalam.  We started in Kochi, then spent about a week in Alleppey.  After Alleppey, we took a ferry to Kollam and a bus to Varkala and now are further south in Kovalam.  We arrived here yesterday and it is yet another beach destination in Kerala and the furthest south that we have been in India thus far.  We are here for five nights before we head north to Chennai.

I already wrote a bit about Kochi, so I would like to continue to talk about our time in India in the next couple of places.  I will probably go into more detail about each one in future posts.

We took a taxi to Alleppey.  We thought about taking a bus, but after looking at the cost and time for all four of us, we decided that a taxi would be a lot easier and probably not much more expensive.  It was about an hour-long ride before we arrived at our homestay in the town of Alleppey.  We stayed at a place called Abru's Holidays which was located in a part of town called "Dutch Square" which is just an intersection about a kilometer from the beach.

I liked Abru's Holidays a lot more than our first homestay and having hot water was a nice treat.  It took us a bit to find cheap food, but the next morning we found a place called Balu Hotel (hotels here are places to eat, not sleep, which is kind of confusing for some).  After finding this place, we kept coming back as the prices were really good and the food was great.  We all could get a meal for about $3-4 and leave stuffed.  I'm talking all you can eat thalis where they keep coming back and filling up your plate and amazing dosas, idly, sambar, chutney, vada, and onion filled uttapam!   It was just great!

Near the beach there are many places to buy food and drinks as well.  The beach is a deep-fried paradise, and in the amusement park known as "Amaze World" you can get a pretty good meal for a not so high cost.  This was a surprise for me, as in the US and a few other countries when you go to an amusement park, you pay out the nose for any kind of food.  Amaze World is an older place though and many of its rides are dated or shut down.  We had visited this place about five years ago and the small train is no longer running.  In the future, I will post a video of this place.  Even in its kind of "run down" state, Persephone enjoyed it and we all had a good time visiting.  The price to get in was 35 rupees (10 for adults and 5 for a child), so $0.50 for Alleppey's version of Six Flags, Disney Land, Coney Island, Silverwood, or whatever you are used to.  Rides cost about a dollar each once you get in, though.

Alleppey is famous for the backwaters and the boat cruises that originate there.  We did not opt for the boat cruise or the houseboat as we are on a budget right now, but did the boat ride when we were here last and it was very nice (except for the huge spider that was by my head the entire time).   We also knew that we would be taking the 8-hour ferry through the backwaters, so I knew that I would get to see more of the rural pastoral South Indian life from the boat and I was fine with that.

After a few nights in the town of Alleppey, we headed to the backwaters area to a place called Lemon Dew.  Lemon Dew is a lot more rustic than many places that most travelers are used to, but we enjoyed it for the most part.  It was located right along one of the canals in the backwaters.  The hammocks that overlooked a rice field was a great place to relax.  The closest food was at a fish thali restaurant about five minutes' walk away.  They had a good veg thali that I just could not get enough of!  And at 60 rupees, this all you can eat feast was a steal!  Each day the cook prepared the side dishes a bit differently and everything was just delicious!  This place was only open for lunch, but it kept me full for the entire day!  If you stay at Lemon Dew, check this place out!

I really liked staying in the backwaters, as it gives you a whole different view of India.  You can watch people fishing, washing clothes and dishes in the river, and working in the fields.  The people are super friendly and love seeing visitors.  Children enjoyed saying hello to Sephie and asking where we were from.  You will also see hundreds upon hundreds of houseboats passing by.  It's almost mind-boggling how many houseboats are in the backwaters.  Some are super fancy with two floors and even swimming pools on top.  Others are decked out with solar panels.   Others are more rustic looking with just a couple of rooms and a patio area.  You can hear all kinds of music playing as the boats pass by, and many people are upon the decks of these converted rice barges dancing and having a good time.

Taking the ferry into the city is a nice way to enjoy the scenery of the backwaters and see life from another angle.  There was a dock near our homestay, but you may have to wait about 45 minutes to catch a ferry.  There are ferries going all over the place, so you have to make sure you know what one you are taking, as well.  Once you get to the city, you will be let off at the ferry dock which is located near fruit stands, snack stands, a good and expensive local restaurant.  If you walk for about ten minutes, you will reach a grocery store with a good selection of produce, snacks, and supplies.

The Alleppey ferry dock is also where you will catch the ferry from Alleppey to Kollam.  This eight-hour-long ferry ride provides some amazing views of the backwaters and is worth taking if you have the time.  Why rush from Alleppey to Varkala or Kovalam when you can meander along and enjoy the real south India and Kerala?  You can get south quicker by bus, car or train, but none of those experiences matches the scenery and enjoyment of the ferry ride.  On our ride along Kerala's gorgeous backwaters, there were only a few tourists and a few Indians, plenty of room for our luggage, and we all had a choice of where to sit.  The views are just amazing!  The boat stops for a good lunch of either veg or fish thali and then later for masala chai and fried bananas. 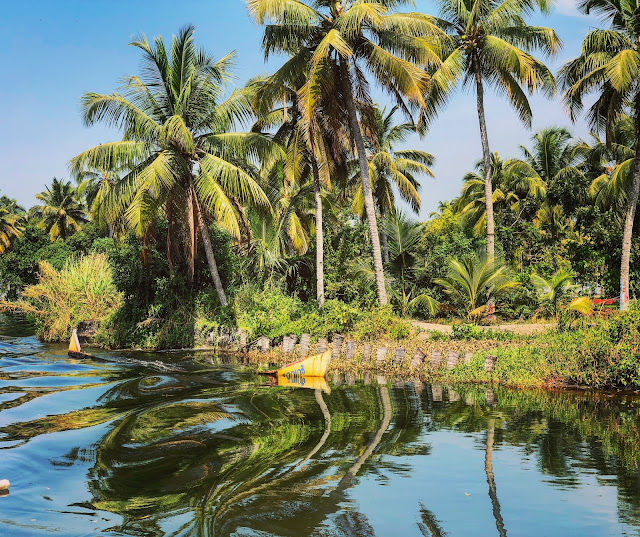 We arrived in Kollam in the evening before making our way towards Varkala by tuk-tuk/auto-rickshaw.  The auto was about 700 rupees and it was worth it for all of us to take one versus taking the bus or train.  We arrived in Kollam in the evening and by the time we got to Varkala, the sun had just set.  The ride was nice, along beaches and lagoons.  The sunset turned the sky a bright pink as we watched people playing and exploring beaches and backwaters.

Varkala is a very interesting town, situated on a cliff overlooking a splendid beach.  I had read that the swimming was rough, but it was still good enough to take a dip in the water.  Both Varkala and Kovalam are far more expensive than Alleppey or Kochi due to their touristy nature.  They are also quite fancy, with shops and restaurants overlooking the sea.  Many people wonder which is better: Varkala or Kovalam, and I noticed a few differences.  The clientele in Kovalam is quite a bit older.  The town is also older and more established.  That also means it's far more developed than Varkala, which seems newer and full of younger people.  The cost of food is almost the same in both.  If you want to have a more low budget experience with cheap food in either Varkala or Kovalam, I recommend heading away from the sea.  Cheap food can be found in Varkala near the train station, and taking an autorickshaw to the train station for lunch is still cheaper than having lunch in town, and perhaps even better.  This is especially true if you are a couple or a group.

In Varkala, we stayed at a place called The Fish Village.  This place was located in a beautiful garden-like jungle environment about a ten-minute walk from the cliff.  It is located near Odayam Juma Masjid, a beautiful mosque that is in the jungle along Black Beach.  Here we were greeted by hundreds and hundreds of sugar ants that bit and gave us some nasty welts.  We realized that keeping food in the room was the reason for these culprits!  Lesson learned.


Kovalam is a busy and picturesque town full of alleys and good beaches.  There are many vendors selling fruit around the beach area, and there are many beach umbrellas to rent on the beach itself.  Restaurants along the beach are expensive, but there are thalis to be found.  Head into the alley areas behind the beach and prices go down a bit.  Head further away to the junction (about a kilometer and a half up the hill) and you will find much cheaper meals.  You can get some good snacks at night, including corn and fruit cups on the beach and enjoy the sunset as the town lights up.

As this is an overview of South India, there is more to be said about each town, and I will write about each one in detail later on.  Overall, Kerala is a beautiful state in India and is far different than the north.  I recommend visiting it, as it feels like its own country.
at January 30, 2020